Tummy troubles are common in children. If your baby has been wailing for no reason, it is more than likely to be a tummy problem. Read on to know the symptoms and how you can prevent the gastric troubles your baby is likely to have. 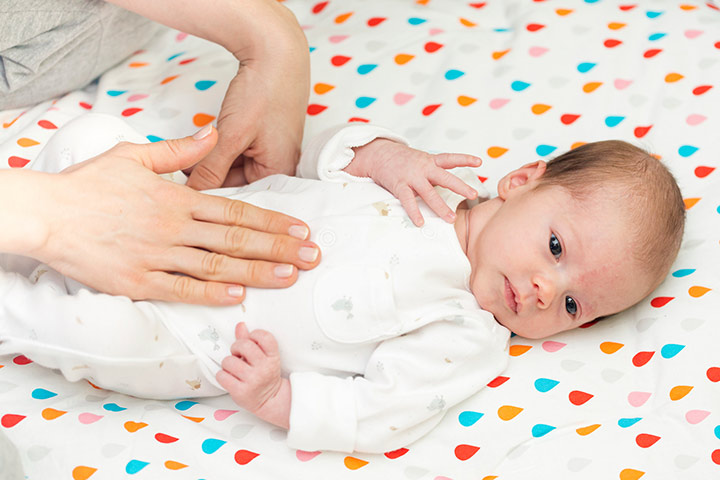 It’s common for babies to have air in their bellies while he or she is still digesting. The air-block causes pressure, which can be painful in babies. Your baby’s gas troubles peak between six and eight weeks.

It is not clear as to why babies are vulnerable to a gassy tummy. But it is likely that their digestive tracts are immature and still developing. If you can recall your baby’s first stools – the dark faeces called meconium – you will understand that its digestive tract is still figuring its way around processing the food and eliminating the waste.

Moreover, the gas in your baby’s body is produced by the normal flora (bacteria) of the gut. With bottle-feeding, it’s likely that you push in some extra bubbles.

Your baby’s belly could look inflated or its back arched.

Your baby must be squirming due to the discomfort. It could get even more colic.

But gas pains are normal and they don’t need much medical intervention. Very soon your baby would even begin to grow, putting the colic troubles behind.

While your baby is lying down, gently bicycle its legs forward and backward by pushing its knees into the chest. Repeat the process several times.

If you are looking for medicines, the best would be to try infant simethicone drops or over-the-counter medicines that give quick relief from colic. Glycerin suppository also helps.

Babies often have gastric reflux. The gastroesophageal reflux is simply called GER and merely means that your baby will be spitting up. You can recognize it from the similar experiences you might have had quite a few times in the past.

The valve that closes the stomach off from the food pipe and prevents food and drink from going back up is not as strong in babies as it is in adults. This could be a reason for food reflux, that is the food can make its way upward again if the baby is eating too fast or too much.

Your baby might be spitting up a little too often. Some babies are more prone to spitting than others. But you don’t have to worry about it unless it is characterized by coughing, gagging, choking, turning blue or having a poor weight gain. If the baby shows these symptoms, it could as well be a sign of GERD or Gastroesophageal Reflux Disease, which would need medical treatment.

You can give your baby intermittent feeds than a lot of it in one go. If you are a nursing mother, consider switching over to the other breast or if your baby is on bottle-feed, see to it that it gets its break after having half a bottle feed.

You might want to burp your baby so it has some additional time to digest food and expel excess air. Burp your baby by leaning it forward or laying her on the side with gentle pats on the back. Or you could hold your baby on your shoulder with its stomach facing you as you pat its back. You could make her lie on her stomach and do the same. Make sure that you keep your baby upright soon after its meal for at least 20 minutes to avoid reflux.

You might want to have extra bibs and burp cloths handy, especially if your baby keeps spitting up. But it won’t go beyond the point of too much worry because your baby will get better by the time it touches its sixth month.

GERD is the more aggravated form of GER. This occurs when spitting up is associated with pain or other health problems. The incidence of babies having GER is one-third and out of this one-third suffer from GERD.

It’s caused primarily because the muscles are weak in babies. As they grow, the muscles start getting stronger, so the frequency of spitting up is lowered.

Since the reflux disease is painful, babies cry a lot after each feed. They might be wheezing, gagging, choking or coughing.

Keep the baby upright during and for some time after feeds. Burp the baby. Keep its head elevated after feeds and while sleeping, lift its head to a 30-degree angle. Your pediatrician might recommend an H2 blocker to reduce the stomach acids that could be aggravating the spit up. For any symptoms such as body turning blue, you might have to rush to the nearest hospital.

This is one of the most common problems, especially when your baby is on formula milk. Formula milk is not as easily digested as mother’s milk, so your baby might have the trouble to poop. That said, it’s quite normal for babies to poop up to ten times a day or about once every ten days. But when they have to poop, but they can’t, it is trouble.

Formula milk, regular milk or introducing new solids can cause constipation in babies.

If your baby is passing hard stools like little balls or its is farting a lot, it is trying hard to poop. Sometimes there can be blood in the stools and could make the stool look black, red or maroon. It is something that calls for a visit to the doctor. But if the stools are yellow, brown or green, it’s normal.

Your pediatrician would recommend fibers that would soften up the stool or administer a glycerin suppository.

Diarrhea can put your baby at the risk of dehydration.

It usually occurs through viral infections or by consuming food or drinks that are contaminated.

Diarrhea results in the loss of liquids from your baby’s body. See your doctor at once.